I’m currently sitting in a hostel in Bishkek, returned from my first session of massages and electrotherapy. I’ve been having issues with a disc in my neck pushing on my nerves which results in a constant dull pain in my neck and causes my ring and pinky fingers to fall asleep when I’m lying down.

Initially I was told by Peace Corps medical that I would be headed to Bangkok for further diagnosis, but a couple days later got a call saying to come up to the capital for treatment instead. If volunteers aren’t able to be treated here in Kyrgyzstan due to lack of equipment or qualified doctors, we’re sent off to the land of white beaches and Singha until we’re better. If treatment can’t be done there, we’re sent to the States.

Obviously I was disappointed not to have the chance to see Thailand, but I’m happy that something is now being done to take care of my neck pain. Tomorrow I’ll receive an MRI, a CT scan, the results of blood tests, more massage and then hopefully later this week a full diagnosis. It’s looking like the prognosis is going to say I’ll need a full exercise regimen daily for the rest of my life. Which I’m cool with. I can’t seem to get it going regularly on my own, but if it’s that or life with a stiff neck, I think I can manage an hour or so of activity.

Other than a free “rub down” I received as part of a family package gift a number of years ago, this was the first professional full back massage I’ve ever had. It was nice. It was really nice. And for that, I say “Thank You,” American taxpayer!

The Peace Corps, being a government agency, is funded by your tax dollars, and so I’m thankful for that little molecule off the top of one of the pennies you gave the US that came my way. I’m being well taken care of and hope that after these days of massages and exercises I’ll be in top shape to hit the ground running back in my village with clubs and teacher trainings. Literally. 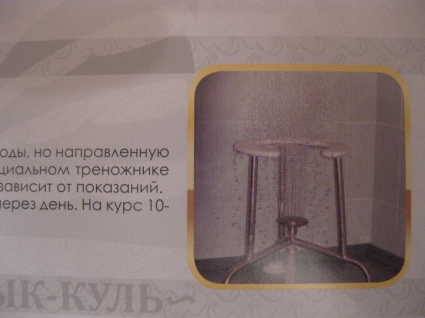