When I was nominated for Peace Corps service back in the summer of 2011, my recruiter told me I would be heading to Sub-Sahara Africa. So when my invitation arrived in early 2012, I ripped it open with glee, so ready to know which warm, bright, wonderful African country I would be headed to. The invite said, “Kyrgyz Republic.”

I was like, “Huh. I thought I knew all the countries in Africa. Where in Africa is the Kyrgyz Republic?” It took about 30 seconds and an internet search to realize I had missed the mark by a mere 4,000 thousand miles. The Kyrgyz Republic, or Kyrgyzstan, is in Central Asia.

It’s that red one in the centerish

Kyrgyzstan is the best kept secret, an adventure tourist’s heaven, the Swiss Alps of Central Asia–truly one of the most beautiful places on earth. From the poppy swept fields of the Fergana Valley to the deep, clear waters of Lake Issyk-Kul to the ice-capped peaks of the Tien Shan mountains, Kyrgyzstan’s rich beauty is something few people in the West have even heard of, much less seen. Kyrgyzstan boasts an astonishing number of varieties of flowers (as many as western Europe), ibex mountain goats, snow leopards and pristine forests and lakes. I’ve posted a few of my own pictures here, but I encourage you to do a #kyrgyzstan search on tumblr, pinterest and the like.

One of the images you’ll surely find is that of a yurt in green pasture. It is still a normal part of life to take the animals up to the mountains in summer where shepherds and families tend sheep, milk horses and relax on vacation. 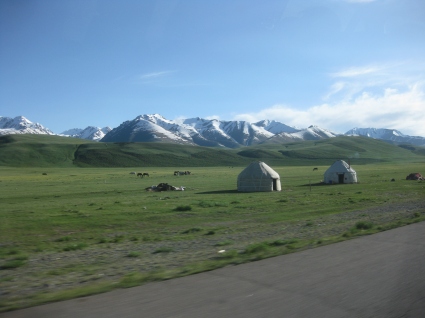 Shot out the window of our moving taxi, flying down the road in Talas near Otmok Pass

The capital, Bishkek, is developing and growing like crazy with a population of nearly one million with new apartments, hotels, restaurants and businesses going up all the time. I wouldn’t call it the prettiest of cities, but with surrounding mountains and the conveniences of the 21st century (it even has a burrito stand!) I can’t complain too much.

In all honesty, Bishkek isn’t much to look at, so I present to you a picture of the Burrito Stand. If you’ve served in the Peace Corps, you understand the significance of this picture.

The Kyrgyz Republic takes its name from the Kyrgyz people, a predominantly nomadic group that have occupied the Tien Shan mountain range and valleys since the end of the 9th century AD. The Kyrgyz were originally a red-haired, blue-eyed and fair-skinned group of people living in present day Siberia who intermarried with Mongols, groups from China, Huns and many other peoples over the centuries. Today Kyrgyz have both Asian and European features but it’s not uncommon to still meet blue or green-eyed Kyrgyz. “Original Kyrgyz,” they proudly proclaim.

Because of the Kyrgyz people’s nomadic lifestyle, their ways were left widely untouched by the various groups that came through Central Asia to control what is present day Kyrgyzstan. In the 17th century it was the Mongols, the 18th the Qing Dynasty, the early 19th the Uzbek Khanate and then in 1876 Russia signed a treaty with China ceding Kyrgyzstan over to the Tsar.

Russia was different from other rulers in their insistence upon forcing men to join their army and so a lot of Kyrgyz people took off for present day Afghanistan where a remnant of Kyrgyz remains in the Pamir mountains. But it was the increase of Russians plus a forced conscription of Kyrgyz Muslims in 1916 that led to violent rebellion. Called the Basmachi Movement, Turkic peoples across Turkestan, or modern day Central Asia, resisted the Russians and were slaughtered in the hundreds of thousands. Around a third of the Kyrgyz escaped across the border to China.

As a side note, somewhere around 1918-1920s there were a number of families from my village who chose to leave for China while others remained behind. After the establishment of Kyrgyzstan as a soviet republic and the easing of requirements for the military, most families returned. (Although around 150,000 Kyrgyz still live in China today.) The families who came back to my village to take up their old residences are called “Chinese” by the rest of the families.

According to my landlord, the houses in the far right shadow are the households in our village whose great-grandparents took off for China for a few years. He refers to them as “the Chinese.”

With the Soviet machine came settlement, bureaucracy, development and a whole lot of Slavic people. Russians, Ukrainians and dozens of other ethnic groups arrived in the tens of thousands until they outnumbered the Kyrgyz in Kirghizia (the soviet name for present day Kyrgyzstan) by almost two to one. In 1989, right at the end of the Soviet Union, the capital of Bishkek was only a quarter Kyrgyz with Russian and Ukrainians making up 60% of the population. One-hundred thousand relocated Germans lived in Kirghizia as well as Uzbeks, Tajiks and even Koreans. During the 1990s after the break up of the Soviet Republics and the coming of independence, over 600,000 people emigrated from Kyrgyzstan mostly back to the lands of their forefathers.

Today Kyrgyzstan is 70% Kyrgyz, 15% Uzbek, and 9% Russian with the remaining 6% made up of 80 or so different ethnic groups.

Independence and the last 20 years

During the period of glasnost and perestroika under Gorbachev, Soviet Republics were given more freedoms, and in 1990 Askar Akayev was elected president of Kirghizia. Kirghizia’s parliament contained members of the Democratic Movement of Kyrgyzstan, and as the boat began to rock in the spring and summer of 1991, Akayev appointed more people inclined towards independence. After the Aug. 19 coup attempt failed in Moscow, Kirghizia quickly moved to establish a new nation declaring independence Aug. 31, 1991, the first of the Central Asian republics to do so. In October of that year, Akayev was elected as the new nation’s first president.

Since 1991 Kyrgyzstan has weathered two revolutions—the first ousting president Akayev in 2005 over issues of corruption and the second in 2010 when Kurmanbek Bakiev was driven out for similar reasons, escaping with his life and billions of siphoned off dollars to a comfy life in Belarus. Through it all Kyrgyzstan remained a “beacon of light” for democracies with the interim president and national figure and hero Roza Otunbayeva handing over power to the democratically elected Atambayev in 2011.

Kyrgyzstan ranks quite low internationally on most indicators for governance and development. However, these numbers should be looked at in light of the immense challenges this nation, young to democracy and openness, has faced in the less than 25 years since the end of communist rule. Things are moving in the right direction and there is a sense of hope to match the current potential for economic growth and development.

Edited March, 2015: In May 2015, Kyrgyzstan is set to become a member of the Eurasian Economic Union (EEU), a customs union currently consisting of Russia, Belarus, Kazakhstan and Armenia. Kyrgyzstan has been reluctant to join, but is facing strong political and economic pressures from Russia to do so. It is unknown at this time exactly what kind of economic impact this will have on Kyrgyzstan. Many say it will be difficult for the first few years as commodity prices rise while salaries remain stable, followed by greater economic growth as more Russian investment comes in and more Kyrgyzstanis find jobs within the Union, namely Russia.

The legendary father of the Kyrgyz is Manas. If he did exist, he was likely a khan from one of the hordes who united several loosely affiliated tribes in the vein of Genghis Khan. Others believe Manas might be an amalgam of several tribal leaders from the 18th century. What is sure, however, is his impact on the people of Kyrgyzstan today. Boys are named after him, festivals are given in his honor, and the government has even based its moral and ethical code on words from the Manas Epos, the world’s longest epic poem written about Manas, his son and his grandson.

A museum in northwestern Kyrgyzstan is dedicated to Manas and its grounds contain his attributed Mausoleum. In the museum are artifacts said to be used by Manas, including a pair of size 100+ pants. (If you’re not convinced by the time you see the pants, those will definitely tip the scale.)

Out of all the colorful and frilly Kyrgyz national clothing, the kalpak is my favorite. It’s a tall, white, elfish looking thing made from felt. The women’s national hat has this towering plumage of feathers and can be seen featured in any music video of any woman singing any song.

This is a very typical Kyrgyz song featuring the ‘komuz,’ a three stringed lute-like instrument

The national food is boiled sheep. Seeing as the Kyrgyz have been tending sheep for hundreds of years, this makes sense; however, don’t look for Michelin rated Kyrgyz restaurants anytime soon. The national drink is fermented horse milk which is slightly alcoholic and can only be described as an acquired taste. The national game is a type of polo played on horseback, but instead of a ball they use a headless goat carcass and instead of sticks they just use their fists. I can’t even make this stuff up. Just watch the video:

Despite their tendency to hurl headless goats from horseback, the people of Kyrgyzstan are incredibly hospitable, generous, kind and welcoming of American visitors. I will continue writing more posts about specific aspects of Kyrgyz culture and you can check the category “culture” for all related posts.

If you would like to learn more about this fascinating and beautiful country, I encourage you to keep reading! There’s not a lot of quality information to be found on the internet about Kyrgyzstan, and not a lot of information in English at all to be quite honest. I’m going to keep updating this list as I come across books, but for now you can check out the following. Comment below if you have more good reads!