When the Japanese travel to the US and other foreign countries, it’s not uncommon to hear a Japanese person walking down the streets of, say, Las Vegas proclaim, “Just look at all these foreigners.” He’s looking right at hundreds of American citizens and it never occurs to him that in fact he is the foreigner traveling about.

It’s easy to fall into this trap. Suddenly you find yourself surrounded by people who are not like you and you feel them to be strange. But, being heavily outnumbered and after the novelty quickly wears off, your head tells you, “Wait a tick. I’m the one who’s strange!!”

Adding evidence are those vast numbers quickly pointing out to you all the ways in which you so expertly meet the criteria of being a strange foreigner. Sometimes though, it hits you all on its own, like when I met up with some American friends for the weekend at a rented apartment in the capital.

“Oh no. We’re now that group of 15 foreigners stuffed into a one-bedroom apartment, from which strange, ethnic smells waft and the sounds of new beats of music keep the locals awake.” Stereotyping is funny and cute until it’s happening to you.

Yet again it’s me on the other side. I’m the token American, pulled out at parties, name-dropped at school seminars. The one who’s expected not to understand, who sometimes finds himself sitting alone while everyone else is at a meeting I didn’t catch the memo for.

To some extent, no matter how long I stay I’ll always be an outsider. After all, this place isn’t part of my shared history and no matter how many days I lay out on the beach on Lake Issyk-Kul, my skin tone will never blend in. I suppose I’ll always have this “cute” accent too, as some of the more kind-hearted so eloquently patronize. 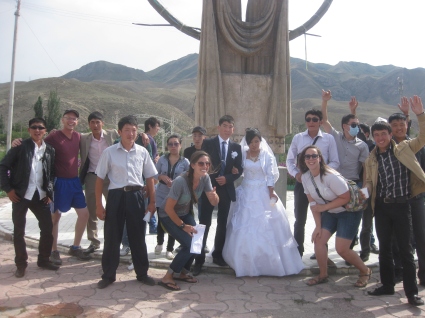 Wedding crashers, Kyrgyz style. You can see the relative joy.

When I lived in Japan, I never did become part of their culture. But that’s also not surprising due to their general culture of insider status only being granted to those born to two Japanese parents in Japan and staying there perpetually while constantly and continually displaying centuries old established social mores.

Luckily I’ve got it a little bit easier here in Kyrgyzstan. Every host family I’ve lived with has referred to me as their son, with even relatives accepting me into the fold with corresponding labels. People want me to have a Kyrgyz name and encourage my participation in holidays and so forth. (Though the whole Kyrgyz name thing might have something to do with “Luther” being completely unpronounceable in any language, or dialect for that matter, outside of middle America—I was “Duusaa” in Japan and now enjoy the extra 2 or 3 “rs” added to my current name, “Liuterrr.”)

Well, to wrap things up here, I’ll make a bold promise to you all so you can help hold me to it: As soon as physically possible, I’ll be adding a post about how to serve sheep’s head. For those of you who find yourself in Kyrgyzstan, knowing how will go a long way in the effort to scrub down that rough and itchy foreigner edge we so easily display.