Everyone needs a purpose. A cause to champion. A journey to undertake. A reason to wake up in the morning. This week, mine happens to be feeding sheep.

Through two years of living in villages I had never once been responsible for any animal—save chasing two wanderers from the flock back down a hilltop—and now that I’d come to the “big city center” the lives of four sheep and five chickens had been suddenly thrust into my hands.

Living here at the “Doctor’s house” with running water, a washing machine and 3G internet, I pictured a life of privilege, a life of ease. There was going to be none of this getting-my-hands-dirty stuff.

So it was I found myself, not two steps through our gate having returned from a mini-vacation on the golden shores of the mountain lake Issyk-Kul, wandering back to the sheep pen in my flip-flops.

My host dad, or Ata, was taking the family that afternoon for a week of wedding parties in the capital and it was going to be my task to look after the animals. He started immediately into the details—how many grams of jem a typical sheep ate per day, how full to fill the water trough, where the extra chicken feed was kept. I pulled out my notebook and started furiously writing so as not to mistakenly forget something and end up with a dead $100 bill on my hands.

We made our way over to the grass pile and a home-made grass chopping table. Operated with your right hand as you pushed the grass through with your left, it was essentially an enormous paper cutter where you could lop off your own hand before you realized what was happening. I took small condolence in the fact that I would be operating this thing at a groggy hour and made note to boil coffee before emerging into the morning air. 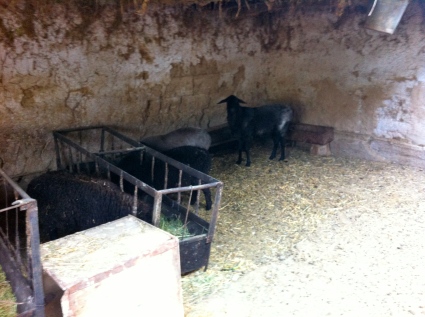 The question came abruptly as I was chopping the grass.

“Huh?” I answered, wondering if I had heard the question right.

“You’re like my son. You’re my uulum. You know I had a son—he was your age, born in 1983. He died though. And now you’ve come to our home.” I saw a single line of water fall from the corner of his eye.

I nodded somberly, trying to find the right words to say. They had told me the story before, during one of my first days here in June. It happened three years ago. Their son had become ill suddenly and the doctors didn’t know what to do. He had been flown to Moscow, but the respiratory illness had taken hold and nothing could be done. He left behind a wife and a daughter he would never meet—his wife was pregnant.

Now their daughter-in-law and grandchild live in Bishkek but they don’t get to see them often. Not having remarried, she spends most of her time with her parents.

“Do you think about him every day?” I asked stiltedly, hoping I had phrased it respectfully.

I looked down and fidgeted with the chopping table.

“You’ve been tasked by God—taking care of these animals,” he said.

I tried to swallow the lump that was forming in my own throat and continued chopping.

After a moment he added, “And don’t chop your fingers off. We don’t need any of that.”

We moved on to the chicken coop and Ata pointed to where the chickens laid their eggs. There was a single one waiting to be placed—unwashed—in our refrigerator.

My family took off later that afternoon and I had a quiet house to myself. In the evening I slid into my now muck covered flip-flops and trudged back out to the pen. The sheep sprinted in circles to clear away from this new force in their midst, vacillating wildly between distrust and the animal instinct of an empty belly.

Poking its head out into the light, a thickly brown sheep hobbled up to the feeding trough. I gasped in horror as I saw my God-given task’s leg dangling loosely from the knee. I immediately called my host mother—the only one to whom I felt I could break the news—and was told not to worry. It had been sick. I texted my brother thinking maybe she hadn’t understood my fervent Kyrgyz—butu syndy!—but he replied back that yes, the lamb’s leg had broken a few days before.

I felt awful. I didn’t know what the procedure was for a broken leg—was this what we did? Just leave it until it fell off? Or was the lamb to be the next sacrifice to our pantry? Could you even properly serve a sheep with a broken leg? And what about it’s own misery? And if not for the sheep’s sake, then maybe would the adrenaline surging through its muscles make it taste strange? These wonderings washed through me as I watched the pitiful thing struggle on its three legs.

“The world is broken,” I thought.

And I thought about God’s glory and the mystery of his sovereignty over all things. Of how his greatness shines forth in the handful of barley scattered on the ground, of chickens scratching the earth and eggs hidden among the grass. Of God’s knowledge of the broken leg and how much more he cares for his two-legged sheep, wandering upright on the earth. How we too are wayward and sprint erratically, choosing between his glory and our own.

Here I was, placed in responsibility over one, tiny little sliver of the world and I already felt the weight of it, pushing down between my shoulder blades, seeping into my heart, a heart still beating three years beyond my brother’s. I wondered if this is not a tiny bit of how God feels for his earth, his heart beating for the world, his own body broken for it, his blood spilled out over the same earth that we, his little creatures, tread.