“Makal” in the Kyrgyz language means “proverb.” Kyrgyz is full of wonderful and puzzling little proverbs – some that match common proverbs often heard in English and some that are real head scratchers. Most Mondays I’ll post one of the more fun ones for you. Let’s see if we can’t make some of these commonplace in America by the time I get back!

“Work is not a wolf”

True to itself and unfortunately quite wholly precedential, there was school today. We were supposed to have the day off. It was planned a week ago or more that all the teachers would use this day to have their required medical check-ups. Well, the hospital in town called last night at 9:00pm to say, “It’s impossible.”

For what reason and how it happened at the last minute I have no idea. I didn’t find out until I woke up at 7:00 and was having breakfast with my host mother who was rushing about getting ready for her first class at 7:30. A bit later I called my counterpart and she was getting ready to head to school as well but added that many teachers didn’t know yet that they had to go to school today and since all the kids were expecting the day off, probably almost none of them would show up. The teachers needed to work on curriculum planning anyway, she said, so it was ok.

I needed to be at home. Not only do I like being at home and lazing about, and especially when I’m told to and have been expecting to do just that for the previous week, but I had promised my host father I would help some with “buckin’ hay.”

I found quickly that I should have gone to school.

These bales of hay were friggin’ heavy. Like, I don’t know, around a million pounds. It didn’t help that the head of the pitchfork kept falling off when I tried to lift the bale up over my head to toss it on the roof of the sheep shack where my host dad was stacking them in neat rows. I couldn’t exactly lift them over my head anyway, and so I would use my knee as a fulcrum, sink the pitchfork handle in the ground, then kind of lift with my shoulder and half hoist half shove the bale onto the low roof. 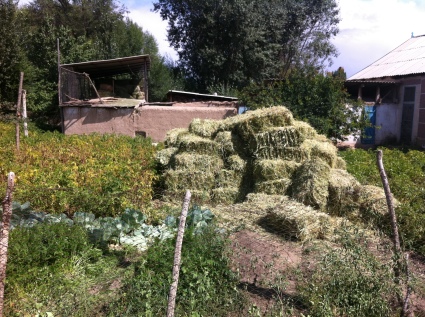 Upwards is the least fun direction to move stuff

My host dad, always quick with a proverb, must have seen me teetering on the edge of giving up and said in that 66-year-old buckin’ hay voice, “Work is not a wolf. It’s not something to run away from.” My head, already bent from lifting million pound bales of hay with my neck sunk a little lower. How was I going to survive this? We were maybe 8 or 9 bales in on a 100 bale stack.

Work smarter, not harder, Luther. That’s right, I can come up with idioms too, you know.

I built a little series of steps up to the roof out of bales of hay. Then I went and got my host brother.

With the three of us, one carrying a bale, one lifting it on the roof and one stacking it, the work was finished in a little over an hour. The work didn’t turn out to be too much of a wolf, though my hands and arms did look like I’d been mauled by one. Next time I’ll face that wolf with gloves and hopefully, a little more courage and grit.

Edit: Later in the afternoon as I was headed to school I learned that the hospital had changed its mind and so the teachers all left to go get their health screenings. This led to more yard work and further blistered hands. My host father did give me an “atta-boy” though so I suppose the wolf has been scared off, hopefully for good.