And I’m not talking about Kyrgyzstan’s chances to play in the World Cup, though there has been some positive movement.

I was sitting across the table from three recent graduates of my new school. We were chatting about university entrance exams, and all three were set to interview at the American University of Central Asia (AUCA) in Bishkek. We practiced interviews and essay formats and went over a few grammar questions.

These girls were already at the top of their games. Each girl placed in the top five nationally in one of Russian Literature, Kyrgyz Language or English Language Olympiads. Now they were competing for spots in a year-long prep program for the most prestigious university in Kyrgyzstan and for scholarships for an education they couldn’t afford otherwise. AUCA is also the most expensive university in Kyrgyzstan. 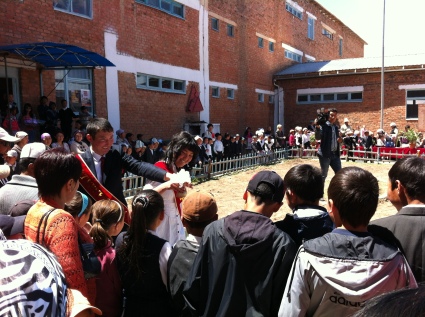 High school seniors at graduation, ringing the bell for the last time

There are cheaper universities and colleges in Kyrgyzstan, but few offer a high standard of education. With low salaries for professors and lecturers, many feel the need to accept bribes to supplement their incomes. This leads to a drop in the quality of education as many students opt to simply pay for their diplomas instead of submitting homework and attending classes.

This is a big reason why diplomas from the vast majority of the 50-odd universities in Kyrgyzstan are not accepted by institutions abroad. This in of itself should be a wake up call to those in charge of higher education. Corruption must be dealt a heavy and widespread blow from top legislators and administrators if the education system is going to have a chance at providing their students with quality education. There are many more students who deserve to be accepted to the few top universities than will be. Many will have to settle for studying in environments that reward those who pay bribes and punish those who refuse.

Earlier this week a message popped up while I was on Facebook. It was one of the girls I had briefly tutored and she was just writing to say she’d “entered to the New Generation Akademy at AUCA !!!” (I’d have used a lot more exclamation points if it were me!) It was super exciting to hear that one of them had gotten in. It’s still no guarantee for her whole university education—the New Generation Academy is a fully funded extra year of prep for university, and then students need to figure out their own methods of paying tuition. But it’s a great first step and one that will give attending students a quality education and experience resultant to their effort.

These kids are more than pulling their weight on their end of the line. Kyrgyzstan—it’s time to step up and give your students the chances they deserve.